You have Successfully Subscribed!

Member Login
About Us

Written by BMT Tax Depreciation on July 14, 2016. Posted in Uncategorised

As property prices continue to rise, many investors have considered the option to purchase an investment property with a friend, family member or business partner.

Co-owning property has the immediate benefit of increasing an investor’s purchasing power while reducing the burden of corresponding expenses. However, many investors who
co-own property and in particular those considering co-ownership are unaware that purchasing an investment property with another party can substantially increase the deductions that can be claimed due to the wear and tear of the items contained in the property.

It’s not uncommon for co-owners to make the mistake of calculating depreciation first and then splitting the deductions based on the ownership percentage. However, legislation allows co-owners to split an asset’s value by ownership percentage first, potentially qualifying them for higher depreciation deductions. As a result co-owners are able to increase their deductions substantially by writing off plant and equipment items far sooner using methods such as low-value pooling and immediate write-off.

Low-value pooling is a method of depreciation which allows an investor with an ownership interest in an asset of less than $1,000 in value to claim deductions at an accelerated rate of 18.75 per cent in the year of purchase and 37.5 per cent each year afterwards. As each investor’s ownership interest may qualify for the low-value pool, co-ownership expands the number of items that can be claimed at this higher rate of depreciation.

Let’s take a look at an example of how the immediate write-off and low-value pooling rules apply to some of the depreciable assets generally found in the kitchen of every investment property. 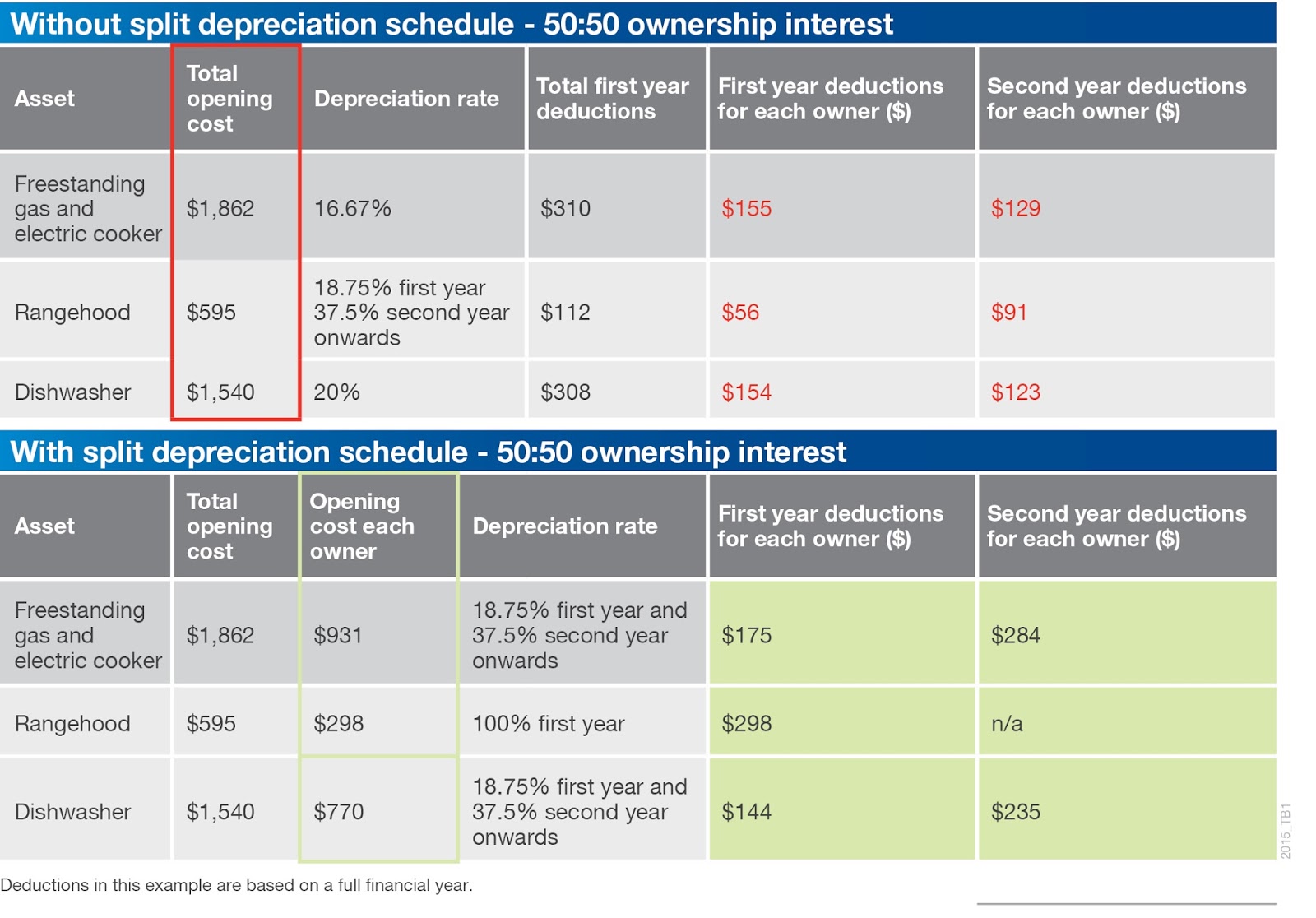 ased deductions sooner when compared to a situation where deductions are claimed without performing the split allocation first.

Using a split schedule also allows the owners to claim an immediate write-off for the range hood, as the 50 per cent ownership percentage split will further reduce the opening cost of this asset to $298 for each owner (less than the $300 threshold set by the ATO).

The increase in deductions that a split depreciation schedule provides are made even more significant when all of the assets typically found in an investment property are included.

A split depreciation schedule is available in any scenario where an investment property is co-owned, whether it is for a husband and wife, friends or business partners.

The deductions using a split schedule can also be calculated based on any number of investors and the percentage of ownership each individual has in the assets, whether it’s for two owners at 60:40 or 1:99, or even four owners at 70:15:10:5.

For owners with lower percentages of ownership, the low-value pool and immediate write-off will apply to more assets, increasing deductions earlier. This is particularly important for investors to understand when entering into a co-ownership agreement and at the time of purchase. For example, a husband and wife might choose to align their percentage of ownership so that the higher income earner holds the greater portion of interest in the assets and therefore that person will be able to claim a higher portion of the deductions at tax time.
It’s important to note however that once an investor has requested a split depreciation schedule, they cannot change their interest in the assets within the property down the track. Depreciation must always be claimed at the percentage of ownership split that is outlined on the original schedule from settlement.

Investors who would like more information about obtaining a split depreciation schedule should speak to a specialist Quantity Surveyor for advice. They should also speak with their Accountant and Financial Advisor before entering into any co-ownership agreement.

VISIT AND SUPPORT OUR PARTNERS

Discover more and keep up to date